It’s been 10 years since Jennifer Jones roared to the forefront of Canadian women’s curling.

“The Shot,” as it is still known, put an exclamation mark on a meteoric rise that has been in the making since the early 1990s.

A quick scan of YouTube yields videos with titles like “Jennifer Jones Best Curling Shot,” high praise for anyone who has ever picked up a broom. If it was indeed Jones’ 10th end miracle during the 2005 Scott Tournament of Hearts that ensured her name would live on forever in Canadian curling infamy, and her play since then has done nothing to diminish that.

Since taking her first Gold at the Scotties, Jones and her rink have gone on to medal seven more times at the iconic tournament, including a Gold medal three-peat from 2008-10.

Jones first struck gold in 1994 as a junior, a feat that would have ordinarily meant a pass-go straight to World Junior Championships. However a change in the ruling relegated her to a playoff game, which she lost. After years of playing at various levels of competition following that bitter defeat, Jones won the Manitoba women’s curling championships, which earned her a birth in the 2002 Scott Tournament of Hearts – no playoff required.

Long-time friend and teammate of Jones, Jill Officer, knows the ups and downs of competitive curling all too well. Officer has played Second for the Jones rink since their Junior days. She was there for the victory in 1994, as well as the successive Scotties’ titles. Officer’s Scotties’ victories put her in an elite group of four to have won four titles – herself and Jones being two of the four.

On this day, Officer is far removed from the bright lights of championship curling, but the new mother hardly has time to rest on her laurels. Only weeks removed from maternity leave, Officer resumed her duties as Second to compete in the Manitoba Scotties, less than three months after the birth of her first child. After a disappointing showing at the Canadian Scotties, which saw them dominate round robin play before falling in two straight playoff games and eventually claiming bronze, Officer and teammate, Lead Kaitlyn Lawes, find themselves at the Manitoba Home Builders Association Bonspiel, guests of team sponsor, JELD-WEN Windows and Doors.

“This season was unique as we had to juggle our team line up because I was pregnant and missed the first half of the season,” says Officer. “Luckily we were able to have some success on the World Curling Tour and finished with a big win at the Canada Cup which qualified the team for the 2013 Canadian Olympic Trials.”

With the coming of spring and the curling season nearly over, the rink has but two events left: one in Victoria and the World Curling Tour Player’s Championship in Summerside, PEI. After that, it’s all eyes on next season. “The goal is to keep training and competing to get better and improve in any way we can,” says Officer, “but also to really enjoy it and have fun while doing it.”

Reigning as Queens of the Rings for so long in Manitoba, a province where curling ranks among the most popular of winter sports, might have caused a lesser team to collapse under pressure. Officer explains this isn’t the teams M.O. “We just like to go out and have fun and focus on what we can do to be the best we can be.”

One thing is for certain, after so many years on the scene, the team couldn’t have reached the level of success that it has without the support of curling fans in Manitoba. “People in Manitoba have been, and continue to be, incredibly supportive of our team,” says Officer. “We love that people are so interested in our team and especially in the sport of curling.”

A highly competitive curling team requires the support of sponsors to thrive. As a proud sponsor of the Jennifer Jones curling team, JELD-WEN is instrumental to their success, both on and off the ice. “JELD-WEN has been a terrific sponsor over the last few years, explains Skip Jennifer Jones. “Without the support of JELD-WEN, we would be limited in our training, but because of their sponsorship we’ve been able to train and compete to the level necessary to have success.”

JELD-WEN Windows and Doors Canada would like to wish Jennifer Jones and her team the best of luck in the final events of the season, and continued success in 2013. 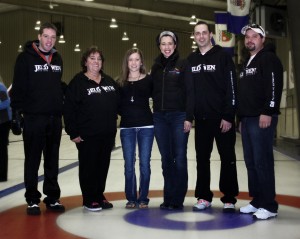 Get Ready For Your Spring Renovations

What is comfort engineering and how can you work it into your renovation plans?