As a key sponsor of the World-Champion Jennifer Jones rink, JELD-WEN Canada would like to wish the team the best of luck at the Scotties Tournament of Hearts, as well as reiterate support for Canadian curling from Victoria to St. John’s.

The Jones rink enters the Scotties as an obvious favorite, having won the title of Canadian Champions from 2008-2010, as well as previously in 2005. Other finishes at the Scotties include Silver in 2006 and 2011 and Bronze in 2007. The 2012 Tournament of Hearts takes place from February 18-26 in Red Deer, Alberta.

“The team and I are just so thrilled to be able to compete at this level once again,” says Jones, “the road to this point wasn’t easy and competition will be stiff at the Scotties. Having JELD-WEN on our side as a sponsor helps us do what we do best, which is hopefully bring the Scotties crown back to Manitoba.

“We’re delighted to play a part in the success of the Jones rink. To help enable the best female curling team in the world compete is always such a real treat and we wish Jennifer and her squad the best of luck at the Scotties,” says Eric Palmer, Marketing Manager at JELD-WEN Canada.

In addition to JELD-WEN’s sponsorship of women’s curling in Manitoba, JELD-WEN continues to support men’s curling in the province as well. As co-presenting sponsor of the Safeway Championships, JELD-WEN ensured the execution of the successful tournament.

JELD-WEN would like to congratulate skip Rob Fowler and his team on a job well done on their victory at the Safeway Championships in Dauphin, Manitoba on Sunday February 12th. The Fowler rink will now move on to the Tim Hortons Brier to face off against the best teams in Canadian men’s curling. 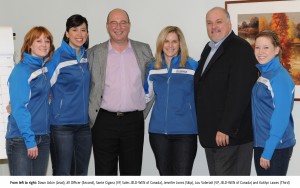