Since 2002, JELD-WEN has reduced its annual workers’ compensation injuries in the U.S. by 80 percent. Entrants were judged on their safety improvement practices and results. While JELD-WEN’s reduction in incidents was important in the judging process, the company was also praised for its development of training programs, tracking and feedback mechanisms, and a host of prevention measures. Previous Teddy Award recipients include AT&T, Nissan, Marriott, and Frito-Lay.

“I would like to thank our employees for generating suggestions and ideas for continual improvement, adopting a culture of safety, and their unending commitment to safety,” stated Kelly Beegle, Vice President of Insurance and Risk Management at JELD-WEN.  “The true reward is that our employees continue to have a safe and healthy work environment.”

“We accept this award with an eye to the future,” Beegle continued. “We will continue to set even higher goals and engage everyone as we strive to achieve them.” 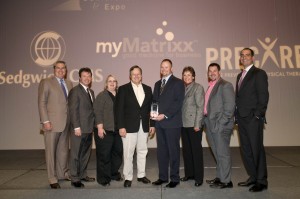 JELD-WEN is one of the world’s leading manufacturers of reliable windows and doors. Consistently ranked as Oregon’s largest privately owned company, JELD-WEN began in 1960 as a small Oregon millwork plant with 15 employees and today has approximately 20,000 employees across more than 100 locations in the Americas, Europe, Asia and Australia. The company’s extensive product offering encompasses windows, exterior doors, interior doors and related building products that are sold globally through multiple distribution channels, including retail home centers, wholesale distributors and building products dealers. For more information on JELD-WEN, visit www.jeld-wen.ca.

About the Theodore Roosevelt Award

Risk & Insurance Magazine’s Theodore Roosevelt Workers’ Compensation and Disability Management Award annually recognizes programs for their efforts to reduce the number of injuries to workers on the job. One top honor is awarded in each of three categories: For-Profit Organization, Non-Profit Organization, and Federal Organization. Judges consider the applicant’s ability to demonstrate a long-term commitment to the improvement of a firm’s workers’ compensation program and cogent examples of innovation and creativity. The 2011 award winners were named at the National Workers’ Compensation and Disability Management Conference and Expo in Las Vegas on November 9, 2011.  Although originally presented under a different name, the Theodore Roosevelt Workers’ Compensation and Disability Management Award has been presented each year for 16 years.

Signs you need to renovate your windows and doors